After the extremely successful Finnish junior show-jumping championships my daughter’s trainer and some of the other parents of junior riders were all excited: “Next year to Young Riders’ GP”. In the truck on the way home from the competitions, my daughter said to me quietly: “Mom, I really don’t want to take Luna to the next level. I could feel on the 140 cm final course how she literally climbed over each fence. She gave me all she had. It would be a very heavy competition season for me having to feel that I’m asking her too much. I wouldn’t feel I’m being fair to Luna who has given me so much.”
So, my daughter needed a new competition horse.

Buying a horse is so very difficult. I felt that since Luna had been – as Mary Poppins – Practically Perfect in Every Way, my purchase criteria would be 170 cm tall like Luna, a Holsteiner as Luna had demonstrated to us that Holsteiners are jumpers and purchased via a dealer, so that if something went wrong, we could return it. And then I got pressured into going to see this 162 cm mare, with a lot of Celle Française and full blood, sold by a private person. Even though I love Quinny to the moon and back, I still think that I should have stuck to my original purchase criteria and should never have bought Quinny.  No! Strike that – that’s how I’ve felt for eleven years, but something amazing has happened in our relationship this year and right now, I’m super grateful to have such an intelligent, sensitive, hard-working and loving horse in my life.

We went to test ride her two consecutive weekends and we did notice that she was sensitive to ride and reactive to what was happening around her. But there was that something, I guess, that I saw later, which my daughter already saw then, which had her promising that she will control her own temperament and have patience with Quinny – she wanted Quinny. Reality hit the fan from day one

It was clear that I had bought us trouble.

The challenge was finding the help I needed

Looking back at the eleven years I’ve had her; I feel that the biggest challenge was that although I was ready to pay whatever a professional would ask, I just couldn’t, at that time, find any professionals who would know how to or want to help us:

Stable personnel were also a challenge for Quinny. A human being is the leader for a horse. Since in most stables I’ve had Quinny the personnel were afraid of her, Q was all the more restless without a strong leader.

“Get rid of her before she kills you”

I’ve been told Quinny is crazy, mentally disturbed, nervous, dangerous etc. I’ve been told to sell her before she kills me. I’ve said I cannot sell her as I cannot trust anyone else to have as much patience with her as I do. I cannot trust people not to resort to violence when their skills fail with her. I cannot trust them not to sell her forward and as sensitive as Quinny is, continuously changing owners would destroy her. I’ve told people Quinny lives with me for the rest of her life or if I can no longer cope with her, she will go to horse heaven. So, people have told me to put her down before she kills me – and I admit I’ve had more than my fair share of accidents. I don’t know what it has been, there’s been that glimpse of something, a something I haven’t until this year been able to put my finger on, a something that has driven me on to finding a way to get into her head, to win her over, to gain her trust.

These eleven years it has taken me to get there have been worth it – through thick and thin. 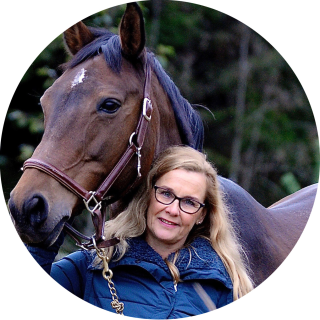 I have a need to understand how "it" works. Life is continuous learning. Through my blog posts I will share my experiences in work life, my Hintsa journey and my passion for horses. What ever happens to tingle my little grey cells.

Search from this blog site

Speaking from experience by Kirsti Lindfors

I share my life experience in the areas I’m passionate about. My approach is to share what I see, hear or feel – what has touched me or evoked an interest in me. I will tell about the decisions and choices I have made in my life and why, without claiming that they would be the right ones or would work for anyone else.